After hearing, “You know, if you have the aptitude, you should join the Mage’s Guild in Winterhold.” about 100+ times during my first play-through/character of Skyrim, I finally did so. My second character, Kegels Grip, made the journey to the Mage’s College as an aspiring young destruction mage, with delusions of grandeur and plenty of aptitude. Upon his arrival to Winterhold, the importance of books became abundantly clear. In the world of The Elder Scrolls V: Skyrim, books are almost as important as gold.

In Skyrim, books are a source of lore that dates back to previous Elder Scroll games and provide a historical perspective of key individuals, guilds and locations. They also have the potential to provide details to a location that could contain untold riches and most importantly, the ability to increase your talent in one of the 18 skills that are tied to leveling up. Books are a pretty big deal, they are also fairly well written and interesting. Those familiar with the series will enjoy a bit of nostalgia while browsing the, at most, 10 page books. Books in Skyrim can also provide you with clues on how to unlock a tomb and provide the player with a bit more immersion to his virtual surroundings.

No other guild puts as much focus and care to their books like the Mage’s Guild. It was during the Mage’s Guild main quest line that I was introduced to new areas (Fellglow Keep) and encounters. Even after 160+ hours with Randy Stardust, my first Skyrim character, I was still being awed by the vastness of Skyrim through Kegels Grip’s eyes. What better reason to be tasked with a quest in Skyrim, a world of dragons and literature, then by the Mage Guild’s librarian and his need to have some books “returned”.

Fellglow Keep, not much to look at from the outside.

Fellglow Keep was a fortress that I had never visited, despite its close proximity to Whiterun and other key locations in Skyrim. Fellglow Keep’s exterior is by no means as architecturally amazing as many of Skyrim’s other fortresses and ancient tombs, but its contents were. There were obviously wolfs lurking within the keep’s rooms for howling could be heard bouncing off the stone walls.Also within this fortress were a magnitude of rooms, jail cells and villains. Who would be interested in books from the Mage’s College? Mages of course! Fellglow was like an alternative school for mages. It housed conjurers, raising skeletal dead, and each kind of elemental mage you can think of. Interspersed within the alternative learning center that is Fellglow Keep, were imprisoned vampires used for experimentation and most entertainingly, target practice. One thing Skyrim gets right, that everyone can agree with, is how it properly mistreats the Twilight kind improperly. In Skyrim, everyone hates vampires. 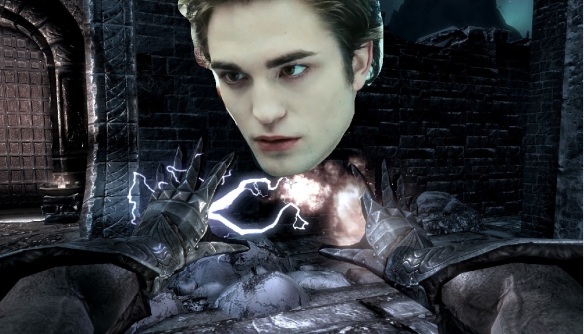 How all those who "sparkle" are treated in Skyrim.

So after killing mages in vast numbers and freeing, then killing vampires, I ran into a memorable occurrence. After 170 hours of playing through Skyrim I still have moments that cause me to laugh out loud and Fellglow Keep was not a disappointment. Upon entering a dungeon, with levers controlling the jail cell doors setting dead center, I caught a mage off guard and unleashed a unrelenting spurt of electricity his way. As he fell just short of the levers I realized his intentions. The howling I heard for the last five minutes were originating behind the cell doors the unfortunate mage was attempting to open. Behind those bars were two wolves, who would of gladly ran distraction as their master shredded me with magic.

With the opportunity to toy with my would be killers, I placed a lightning rune in front of their cell door, prepped my most powerful fire spell and then, “Open sesame.” Almost at the exact moment that the first wolf tripped the lightning rune I unleashed my dual wielded fireball, hilarity ensued. The lightning rune lifted both the wolves off their feet and my fireball  propelled them even further, causing them both to spin like howling helicopters, right at me. I had the best seat in the house and just as the flaming wolves careened towards Kegels’ face the flame killed them and they slid across the floor, still rotating.

The wolf-copters alone made the journey worth it but after defeating a conjuration mage in a hard fought magic battle, were I cheated by ending it with a sword (that’s the punishment for overdue books), I was rewarded back at the mage college with… more books. These books however, all increased magic skills after reading them. In Skyrim, books are a pretty big deal and it pays to be well read.